Djerdap National Park is located in south-eastern Europe, in the northeastern part of Serbia, on the border with Romania. Along the Danube’s right bank, on a 100 kilometer stretch from Golubac Fort to castrum Diana Karataš, the National Park encompasses a narrow forested mountain area, two to eight kilometers in width, reaching 50 to 800 meters above sea level. There are three primary entrances to Djerdap National Park, two on Djerdap main road М 25 near Golubac and Diana Karataš, and another one on the R 106 regional road Porečki Most–Klokočevac. The National Park is open to visitors all year round and it can be toured by cruising on the Danube, or along Djerdap main road, as well as down biking and hiking trails, with adherence to the Park’s rulebook and the rules of conduct in protected areas. 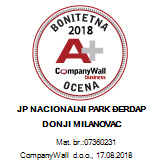